Which Rare Non-Law Book in Your Library’s Collection is the Most “Interesting?”
Rare Law Book Librarians Offer Some Answers.

Most subject-specific book collections hold works that could be considered “out of scope.” Rare law book collections seem to conform to this reality, and their non-law pieces often have stories to tell. Sometimes these materials have been selected intentionally because of the context they provide for other, legal, works in the collection (such as histories). They might stealthily accompany gifts of law books – to be uncovered later in the depths of a box – or arrive inserted in the leaves of one of their “legitimate” companions. Such non-law holdings add spice to a collection and pique the interest of patrons. Indeed, it is difficult to imagine that any collection, regardless of its focus, could avoid a dash of non sequitur.

We posed the title question above to a group of rare law book librarians. We expanded the question to include not only books, but any printed or manuscript material, and also realia. To our delight, the five librarians who responded (six, counting us, the GW Law Library) each wrote sua sponte about a piece from a different “class” of material. Included are an early printed book, a manuscript, a twentieth-century reference book, a newsletter, a piece of realia, and a pamphlet.

Below are the librarians’ responses, along with images and links to the bibliographic records for their chosen pieces.

The smallest item in our collection also is one of our most precious treasures.  The Itinerarium Benjaminis [of Tudela] Latine Redditum Opera Constant L’Empereur, or the Travels of Benjamin of Tudela, is a Latin text printed in Lyon by Elsevier in 1633. The book was written by Benjamin of Tudela, a twelfth-century Jewish adventurer known for his extended journey of more than ten years throughout much of Constantine’s empire. He recorded his observations vividly with an attention to detail unrivaled by other extant contemporary accounts, and historians have looked to Benjamin’s travel diary as a valuable primary source ever since. At a time when most books were religious or legal in nature, this type of travel narrative was a rarity. Its small size of 3½ by 2 inches makes it literally a portable pocket edition. To us in Special Collections it is especially striking because of its size, and according to Erin Kidwell, Curator of Legal History Collections, “it is a traveler’s log of what was left of Justinian’s empire and as such complements the other Justinian materials in our rare book collection.”

I’m taking a slightly different twist on Jennie’s question – a non-law use of a law-related item. One of my favorite early manuscripts in our collection is a volume of tracts that covers Roman and canon law topics, including riparian rights. Recently it has garnered a lot of interest in the early manuscript community, not so much for its legal content but for its illustrations of rivers, which are beautiful!

The volume is bound in eighteenth-century half vellum, and consists of 267 leaves. The first page is bordered in blue and purple flowers, birds, and grotesque figures. The work features many decorated initials; the first initial of the text is historiated, showing a surveyor and lawyer or judge before a river, which we presume is the Tiber. The manuscript is illustrated with one full-page and thirty-eight small diagrams showing how to survey boundaries along rivers and bodies of water.

We plan to digitize the manuscript and make it freely available in 2016; when it’s available we’ll add a link in the HOLLIS catalog record.

I first encountered McMurtrie in our Rare Book Room ten years ago when I was looking for something else.  The book is slim, only 151 pages, and has a red cloth spine.  I remember opening it and being a bit confused since the text is interleaved with copies of title pages and broadsides, mostly in French and Spanish.  I returned it to the shelf and did not take time then to actually read it.

Years later I observed that scholars writing about Louisiana’s early history referred to the “O’Reilly Code” as the source of Spanish law introduced at the time of Spanish colonial rule. However, their references to “code” were unclear.   I wanted to see this code and thought it must be a printed book.  I called my friend Florence Jumonville, author of Bibliography of New Orleans Imprints 1764-1864 (1989), to ask her about the O’Reilly Code.  Florence thought a second, and said, “Look in McMurtrie.”  Oh, that book!

Louisiana’s second Spanish colonial governor, Alexander O’Reilly, arrived in 1769 after Louisiana was ceded to Spain by France.  “O’Reilly’s Code,” a series of decrees issued over the months of his tenure in Louisiana, replaced French laws with Spanish laws; other O’Reilly changes included creating the Cabildo, a council with administrative, legislative, and judicial functions, to replace the French Superior Council. The proclamation I found most interesting was Instructions upon the manner of instituting suits…and of pronouncing judgements…in conformity to the statutes of the Recopilacion of Castile and of the Indies, for the government of the judges and parties pleading (1769). Florence was quite right to refer me to McMurtrie as the first page is reproduced very nicely.

Now I was interested in reading the entire book.  Douglas McMurtrie (1888-1944), an important bibliographer/historian of printing, wrote prolifically on the subject and directed the WPA’s American Imprints Inventory (1939-42).  In his introduction to Early Printing in New Orleans he writes: “During its early years, the press in New Orleans had an eventful and colorful history.  Yet the work of the first printers in Louisiana has received scant attention at the hands of typographic historians.  During the forty-seven years covered in the present essay, there were four periods of varying sovereignty.  The colony owed allegiance first to France, next to Spain, then to France, and finally by the terms of the Louisiana Purchase, became United States territory. These kaleidoscopic changes in political complexion – with no parallel in the other American colonies in which printing had its inception during the eighteenth century – are all reflected in the typographic records.”

The use of the word kaleidoscopic is apt for Louisiana’s political changes.  The pieces are shaken up and look different when they settle but the pieces are not totally new. 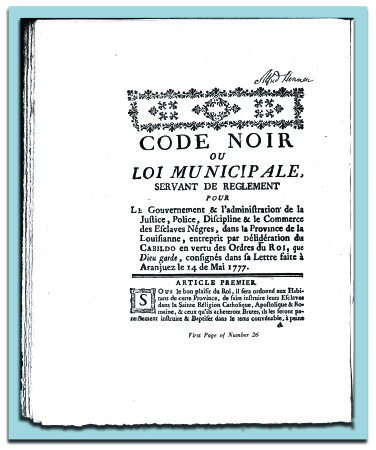 One of the most interesting non-law items I’ve added to the Yale Law Library’s rare book collection arrived as part of a gift, as such items often do. Stuck inside a book from an early South African law firm was a Boer War relic with a connection to the history of the Boy Scouts. The relic is issue no. 147 of the Mafeking Mail: Special Siege Slip (May 22, 1900), “issued daily, shells permitting” according to the masthead. The Siege of Mafeking was the most famous battle of the Second Boer War (1899-1902). The British, commanded by Colonel Robert S. Baden-Powell and outnumbered four-to-one, held out for 217 days against the forces of the South African Republic. Baden-Powell was proclaimed a national hero. He is famous today as the founder of the Boy Scouts, inspired in part by the Mafeking Cadet Corps, young boys who assisted during the siege by standing guard, carrying messages, and performing other duties. The newsletter was a tool for boosting morale. It includes summaries of war news, commendations for bravery to several officers and enlisted men, and want ads. A schedule of “Garrison Sports to be Held on the Recreation Ground on Her Majesty’s Birthday” includes tug-of-war, 100-yard dash, tent pegging, wrestling on horseback, and “Greasy Pole.” The newsletter was found in one of sixty volumes from the library of the Reeders & Rosettenstein law firm, which was founded in Winburg, Orange Free State, in 1875, and went on to be the longest continuously operated law firm in Johannesburg, South Africa. The collection was bequeathed to the Yale Law Library by the late Professor David S. Rosettenstein of the Quinnipiac University School of Law.

Among the treasured possessions of the Dickinson School of Law is a stone presented to the Corpus Juris Society in 1949—a surviving relic from the ruins of the Inner Temple, one of England’s great Inns of Court, destroyed by the Nazi Blitz in 1940-41.  According to a note in the June, 1949, Dickinson Law Review, the Rt. Hon. Lord Greene, P.C., assisted the Society in obtaining the ancient rock.

Sometime during the twelfth century the Knights Templar built the Temple Church along the Thames River.  Lawyers occupied the church and surrounding buildings following the abolition of the Order in 1312.  By 1388 they had organized themselves into two “Inns of Court”—the Inner Temple and the Middle Temple.  These, along with two other Inns of Court—Lincoln’s Inn and Gray’s Inn—provided food and housing for practitioners and law students, as well as space for teaching the English common law.  Among the most famous Inner Templars are Sir Francis Drake (c. 1540-1596), Sir Edward Coke (1552-1634), John Selden (1584-1654), Mohandas Gandhi (1869-1948), and Jawaharlal Nehru (1889-1964). Geoffrey Chaucer (c. 1340-1400) also is claimed as a member, but to date this remains unconfirmed.

The Inner Temple, along with the neighboring Middle Temple, suffered great damage during the Second World War.  German bombs first hit the Inner Temple on September 19, 1940, when the library clock tower was struck.  Further bombings caused additional wreckage, with the worst damage coming on the night of May 10, 1941.  On that night, incendiary bombs gutted the Temple Church, and largely destroyed other buildings including the Inner Temple Hall and Library.  Fortunately, some 40,000 volumes from the library—approximately half of the collection—had been removed and transported to safety before the raid.  Reconstruction started following the war, and was completed during the 1950s.

The stone from the Inner Temple originally was displayed outside the dean’s office in Trickett Hall “as a memento of the common source of the law of the English-speaking world” (Dickinson Law Review).  For many years it was the centerpiece of a display in the Sheely-Lee Law Library.  It is currently in storage, awaiting its renaissance in a new display.

France, 1789:  The Declaration of the Rights of Man championed the free communication of ideas, including the freedom to print, signaling the end of royal censorship.  But before that moment, a torrent of pamphlets and other ephemera had washed over France as popular discontent and sentiment against the King reached a flash point, and restrictions on printing fell away.  Today these pamphlets form a major corpus of sources for the study of public opinion during the French Revolution.  L’Armée Citoyenne, issued on the eve of the storming of the Bastille, illustrates the urgency, satirical perspective, and people’s voice typical of many Revolutionary pamphlets (which often were anonymous, libelous, or pornographic).  It paints a vivid picture of royal troops mingling merrily with the people, mocks one commander of royalist troops (the Duc de Broglie is now “le Maréchal d’Imbroglio”), and depicts a populace primed to challenge royal authority.  Chaos is apparent: the monarchy is ridiculed, the nobility jeered.  The next day a mob of thousands stormed the old royal prison, forever fixing the name “Bastille” in French history as an emblem, accurate or not, of both liberation and despotism.

This pamphlet was part of a group of law pamphlets purchased from a European bookseller in 2002.  The pamphlets as offered were not identified individually.  So L’Armée Citoyenne was “discovered” – or, rather, its significance was recognized – upon its unpacking at the Law Library after its journey across the Atlantic. B