Ranganathan Rephrased: The Library Is an Evolving Organism

Scholar and librarian S.R. Ranganathan (1892-1972), author of The Five Laws of Library Science.

Discovering Ranganathan’s five laws of library science is one of my first memories of library school, as perhaps it is for many librarians.  Scholar, mathematician, and librarian S.R. Ranganathan (1892-1972) is regarded as the father of library science in India, yet his influence on libraries and librarians was worldwide, and continues today, chiefly through his prolific writings. Although his 1931 classic The Five Laws of Library Science[1] runs to more than 450 pages, the laws themselves are short and sleek:

The longer I work in libraries, the more I recognize how profound these simple declarations are.  In only a few words, Ranganathan succeeded in encapsulating the universe of librarianship.  His enduring set of principles has served as a touchstone for library leaders for many decades, including the late legal scholar and bibliographer Morris L. Cohen, who, as president of the American Association of Law Libraries, made reference to Ranganathan’s library tenets in his 1971 article “Towards a Philosophy of Law Librarianship,”[2] and former American Library Association President Michael Gorman, who offered a reinterpretation of the five laws in 1995.[3]

The five laws remain relevant in library education today, as demonstrated by this infographic from the library programs at the University of Southern California.  The infographic presents the five laws, embellished with quotes from Gorman and supporting library statistics, inviting librarians and students alike to “brush up on the foundations of our discipline.”[4]

The Five Laws for Today’s Academic Law Libraries.  Declining enrollment and diminishing budgets have obliged many law libraries to re-evaluate formerly expansive material purchasing practices. In preparation for a recent meeting with my librarians, I turned to Ranganathan’s laws as a blueprint for renovating our collection development policy.  Upon revisiting the laws, I decided a slight rephrasing was in order to help us frame our new policy. In the context of our rapidly-evolving library environment, our new policy would need to reflect a reconsideration of the traditional paper-driven collecting strategy, as well as address the question of access to materials in other formats, especially digital. My retrofitted version of Ranganathan’s laws for the meeting handout appeared as follows:

Much could, and has, been written about the current application of the original laws, and much could be made of the nuances of my alterations to Ranganathan’s phraseology.  However, in this essay, I would like to focus upon exploring the concept of the library as an “evolving” organism as opposed to merely a “growing” organism.[5]  Whereas we think of “growth” as an increase in the size of an organism, “evolution” on the other hand signifies progressive development, a change from a lower or simpler condition to a higher or more complex state. I also intend to fold the concept of adaptation into my theory of library evolution. Finally, the present exploration is limited to the concepts as applied to collection development, though the laws are relevant to every realm of library service. 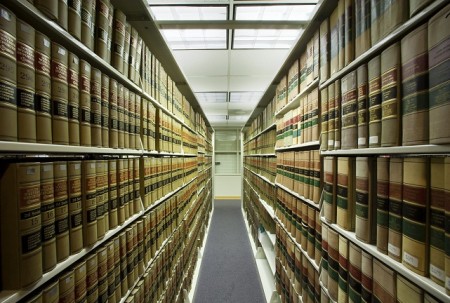 Traditional Model: The Law Library as a “Growing” Organism.  For many years, part of an academic law library’s value was tied to its physical size and the size of its physical collections. The American Bar Association Annual Questionnaire asked questions such as:

– How many titles and volumes owned?

– How many square feet devoted to library purposes?

– How many linear feet occupied by library materials?

– How much linear footage left for growth of collection? [emphasis added]

Law librarians concerned themselves with purchasing the print statutes and case reporters for all U.S. jurisdictions (at a minimum) and major treatises and looseleaf services on core legal topics and practice areas. Often libraries carried multiple looseleaf titles or multi-volume treatises on a particular topic from competing publishers. To name just two examples, we have both Couch on Insurance and Appleman on Insurance, and at one time we subscribed to multiple looseleaf services for tax: United States Tax Reporter, Standard Federal Tax Reporter, Federal Tax Coordinator, BNA Tax Portfolios, and Merten’s Law of Federal Income Taxation. When computerized legal research was introduced, libraries added subscriptions to Westlaw and Lexis, yet retained all the print subscriptions. Ownership of print materials was still an important metric in assessing a library’s support of the legal education enterprise. 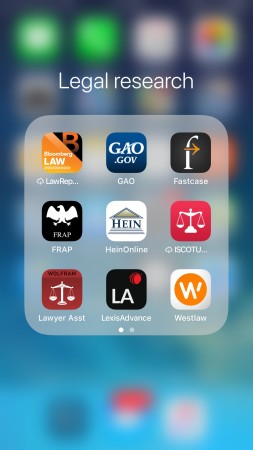 Searching legal databases on a smartphone: a dream in the late twentieth century, a reality by 2010.

The Rapid Evolution of Computerized Legal Research.  Regarding Westlaw and Lexis, let’s take a look at “recent” (within my professional life) law library evolution just in the realm of computerized legal research. When I began my library career in the early 1990s, our students gained access to Westlaw and Lexis (text-based systems) via dedicated dial-up terminals, and checked out the password for the database at the circulation or reference desk. There was also a LegalTrac station where students could search a CD-ROM (updated monthly) for citations to relevant law review articles. Much other content, including encyclopedias, directories, and other reference books, was being published in CD-ROM format.

Some librarians briefly thought CD-ROMs might replace books. Then came the graphical web browser and widespread use of the internet. With the advent of Westlaw.com and Lexis.com, authorized users could gain access to the two major legal research databases from any personal computer. LegalTrac and our other databases also moved online. At that point, the CD-ROM began to follow the dinosaur into oblivion. Today, our users can gain access to most library subscription content from their smartphones! From giant dedicated terminals to a device that fits in a purse or pocket:  this is radical, exponential change, and it occurred in just a few decades.

A Transformed Legal Landscape Forces Evolution.  Now let’s return to the bigger picture of law library “evolution” as opposed to “growth.”  Changes – in the legal publishing industry, legal marketplace,  legal education, and in the culture and expectations of our students and faculty – require law libraries to adapt. Constantly rising print subscription costs, coupled with decreasing or flat budgets, made it impossible for many libraries to continue the practice of maintaining duplicate print and online materials. Primary sources were the first print subscriptions most of us let go; the statutes and cases for every U.S. jurisdiction are available in multiple online platforms to which we subscribe, and most are also available online for free, though the quality of the search interfaces varies greatly.

Finding tools such as digests were also prime candidates for cancellation, since students and faculty searched online more frequently. After the arrival of HeinOnline with its image-based Law Journal Library, which for the first time presented law reviews exactly as they appear in paper, librarians also began to cancel law review subscriptions. Libraries could meet the ABA Standards by providing “reliable access” to these materials rather than being required to own them. Many looseleaf subscriptions were canceled if available online, or were placed on a “purchase every x years” rotation. However, those of us with adequate resources kept building our monograph collections. 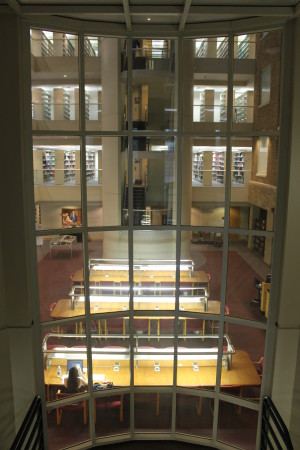 Captured from a stairwell just outside the Bowen School of Law Library, the library reading room
and upper floor stacks.

Adaptations in Response to Shrinking Materials Budgets.  As law school enrollment declined in the early and mid-2010s, many law libraries saw dramatic cuts in their budgets.  Consequently, a number of libraries no longer are in a position to purchase monographs with the goal of building a valuable and sophisticated research collection, especially since fewer users actually seek out works in the print collection. Indeed, limiting our print monograph purchases proved to be the most difficult hurdle for some of our own librarians to clear.

Law libraries have found creative ways to adapt to this new reality. One adaptation is the implementation of “acquisition on demand” services like ProQuest’s Ebook Central. In this model, records for hundreds of titles are added to a library’s online catalog, making the titles discoverable to researchers. When users click on a title, they may briefly (five minutes) view the title in their browser (no cost),  request a short term loan of the e-book (the cost is a percentage of the full purchase price), or request that the library purchase the title. Using this model, libraries can make a plethora of information accessible to their constituents but only pay for the resources actually used.

Consortial retention agreements represent another adaptation. In these arrangements, members of consortia agree to retain specific print titles and to provide access to other members via photocopies or physical loan of the requested items.  This is not a new sort of arrangement, but one that is especially useful today.  An example of one such agreement is the Mid-America Law Library Consortium (MALLCO) Treatise Sharing Agreement, available at http://mallco.libguides.com/c.php?g=374784.  Sharing agreements also exist for state codes. These arrangements allow the member libraries to retain access (albeit not immediate access) to all of the print titles in the agreement while only paying for and physically housing only a few of those titles.

New Model: The Law Library as an “Evolving” Organism.  What would Ranganathan say? Legal education and the legal marketplace continue their rapid change. The prodigious quantity of legal information produced by litigation, legislation, and regulation, plus secondary analytical sources, presents a challenge to libraries seeking to offer these resources to their users. What do we purchase and in what formats? How do we best make these materials accessible to our users? There may be more questions than answers, but the certainty remains that law libraries must continue to respond effectively to changing circumstances, and their evolution depends upon clear-sighted librarians who make it a practice to educate themselves on all aspects of today’s legal publishing environment.  This approach allows libraries to make optimal use of available resources to meet user needs in a volatile legal and market environment.

Though Ranganathan in his fifth law speaks of a “growing organism” in terms of simple accretion, he also acknowledges that “growth” includes the more complex notion of “evolution.”[6]  Electronic databases and books were a glimmer in the future during Ranganathan’s time, so it was not for him to analyze library evolution in the context of a wide-ranging shift from books to electronic formats.  But the value and appeal of Ranganathan’s five laws lie in their timelessness and universal applicability, and their flexibility permits adaptation to unforeseen events and conditions.   The evolution observed today in successful law libraries as they answer the questions posed by a transformed library environment likely would elicit Ranganathan’s seal of approval.

Few law libraries are “growing” today.  Rather, many are shrinking or remaining static in volume counts and square footage. But the adaptations described above and others like them allow law libraries to provide an array of resources in the face of leaner budgets and smaller footprints.  In this way, they can continue to evolve and fulfill their mission of connecting users with the information they seek.B 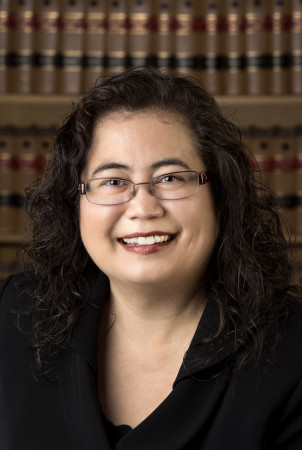 [5] I hasten to add that Ranganathan included “evolution of new forms” in his discussion of growth.  See generally Ranganathan, The Five Laws, Chapter VII, “The Fifth Law.”