First Editions of the Codification of Statutes from Saxon Transylvania in Latin and German, bound together. 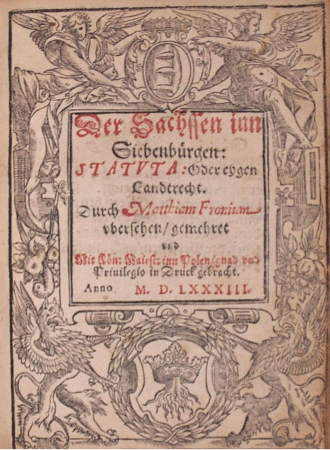 The Saxons began to colonize areas of Transylvania in the mid-to-late twelfth century when King Geysa II of Hungary (r. 1141-1162) and his successors invited German pioneers to settle, defend, and improve the less developed areas in Transylvania. In addition to land, these settlers were promised certain rights and privileges of autonomy. This promise was formalized in 1224 by Andrew II in Goldenen Freibrief. The Saxons sustained their customary law, much of which had originated prior to the colonization of Transylvania. Der Sachssen in Siebenbürgen was the codification of these customary laws which, along with complementary Roman law, guaranteed Saxon Transylvanians personal freedom, rights to the land they settled, and equality before the law. The codification was approved by Stefan Báthory, Prince of Transylvania and King of Poland.

This exemplar is bound in contemporary blind-tooled leather with four raised bands. Both title pages bear an architectural border that surrounds the title, incorporating the Báthory family crest and the Brasov town coat of arms. There are decorated initials and catchwords throughout the text. The front paste-down bears the name stamp of “Dr. Albert Krall … Hermannstad.”

This is the only copy of the 1583 edition recorded in the United States. B