Magna Carta’s Return Visit to the Library of Congress 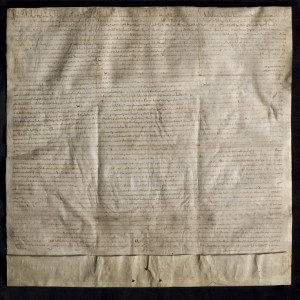 On a day in June nearly 800 years ago, King John of England made an agreement with a group of barons on green land at Runnymede, near Windsor.  King John met the barons’ demands for reform, granting his subjects the right to hold their sovereign accountable to the rule of law.  The resulting document, Magna Carta, became the foundation of the constitutional order of the British Commonwealth countries and the United States of America.

Magna Carta, Latin for “Great Charter,” was issued to guarantee the rights of the barons of England against an overbearing king.  Eight centuries later, it has become the historic heart of English and American Law.  It is one of the earliest statements of limited government and a point of departure for centuries of legal thought on individual rights.

2014 Exhibition Aims to Shed Light on Magna Carta as Inspirational Guide
On November 6th, the Library of Congress will unveil an exhibition—Magna Carta: Muse and Mentor—to commemorate the British Ambassador’s transfer of the 1215 Lincoln Cathedral Magna Carta to the Librarian of Congress 75 years ago.  The exhibition will continue into the new year to welcome the 800th anniversary of the sealing of Magna Carta in 2015. It will close on January 19, 2015.  The exhibition—to be located in the South Gallery, second level of the Thomas Jefferson Building, 10 First St. S.E., Washington, D.C.—will be free and open to the public from 8:30 a.m. to 4:30 p.m., Monday through Saturday.

On November 6th, the Library of Congress will unveil an exhibition—Magna Carta: Muse and Mentor—to commemorate the British Ambassador’s transfer of the 1215 Lincoln Cathedral MagnaCarta to the Librarian of Congress 75 years ago.

Why Muse and Mentor?  By definition, a muse inspires, while a mentor guides.  Magna Carta is a timeless guidepost.  While Magna Carta was, in its context a very local agreement, a peace treaty put together to prevent a civil war, King John’s sealing of the charter was nevertheless a turning point in western history, a key moment that marked a shift toward parliamentary government, and in due course, individual rights.

What is unique about the Lincoln Cathedral Magna Carta?  As Nathan Dorn, exhibition curator from the Law Library of Congress, points out, “The Lincoln copy is considered the most robust and the easiest to read of the four remaining original copies.”  Dorn continues, “the Lincoln Magna Carta also has the clearest provenance: on the back, scribes wrote ‘Lincolnia’ – the Latin form of its intended destination.  Records indicate the charter arrived at Lincoln Cathedral about June 30, 1215, and has been kept in Lincoln ever since.”

At the center of the exhibition will be the Lincoln Cathedral Magna Carta, one of four existing exemplifications of Magna Carta dating from 1215 and bearing the seal of King John.

Approximately 65 items from the collections of the Library of Congress will surround the 1215 Lincoln Cathedral Magna Carta to illustrate 800 years of its history and the document’s influence on the world.  The exhibition will explore the origins of Magna Carta; its use as a constitutional guarantee of liberties during the seventeenth-century conflict between the English Crown and parliament; its appearance in the laws of the British colonies in America; its influence on the founding of the American republic; its relationship to the United States Constitution and the Fourteenth Amendment; and lastly, representations of Magna Carta in art, literature, and pop culture.

According to Dorn, the exhibition will include collection items that tell the story of the charter’s powerful influence through the ages: medieval manuscripts of English law, seventeenth-century pamphlets agitating for ancient liberties, English and colonial court transcripts, newspaper clippings from the Stamp Act controversy, and hand annotated drafts of decisions from pivotal decisions of the Supreme Court; and even pop-culture items—from the legacy of Robin Hood to genealogical societies.

What is unique about the Lincoln Cathedral Magna Carta? As Nathan Dorn, exhibition curator from the Law Library of Congress, points out, “The Lincoln copy is considered the most robust and the easiest to read of the four remaining original copies.”

Martha Hopkins, director of the exhibition, is confident viewers will walk away from the exhibition with a view of Magna Carta as not only an important part of British history but also a key founding document for the United States and its legal system.  “Being able to see such an iconic historical item as a Magna Carta from the original issue of 1215 without making a trip to England is a rare opportunity that I am sure will thrill Library visitors.”

Magna Carta Events Three Years in the Making
Library personnel have planned the exhibition for over three years.  Rather than merely embrace the anniversary as an excuse for “doing something,” the cohesion and drive of the staff involved have propelled the exhibition as a testament of the document’s contribution to history.  Three years ago former Law Librarian of Congress Roberta Shaffer first had the vision to mark the 75th anniversary of the Library’s reception of Magna Carta with the 2014-2015 exhibition.  Shaffer says one of her dreams was to showcase Magna Carta because “it is a critical part of our legal DNA.”

Shaffer placed the showcasing of Magna Carta into the capable hands of Robert Newlen, Assistant Law Librarian for Legislative and External Affairs, and William “Jake” Jacobs, Chief of the Interpretative Programs Office at the Library.  Newlen and Jacobs put her vision into action on this side of the Atlantic and connected with Sir Robert Worcester, Chairman of the 800th Magna Carta Committee in the United Kingdom.

Among Newlen’s first steps was to obtain buy-in from the Lincoln Cathedral.  He visited the Cathedral in the Fall of 2011 with the help of the Friends of the Law Library of Congress.  His commitment ran deep, as Newlen recounts with the following story.  “At one point, during a train ride to Lincoln from Manchester, I had to change trains.  To get to the other track, I had to carry my luggage through a cow pasture—in full suit and loafers.  Perhaps I should have questioned whether this was meant to be … I decided the cow pasture was just an odd path en route to an extremely important exhibition.”

In addition to relations with Lincoln and pulling together all of the Library divisions necessary to create an exhibition of this scale, outside funding was needed to make the exhibition move forward.  Newlen knew, as many educational and cultural officers in the United States are well aware, a project like Magna Carta: Muse and Mentor requires fundraising which continues to be an ongoing effort. 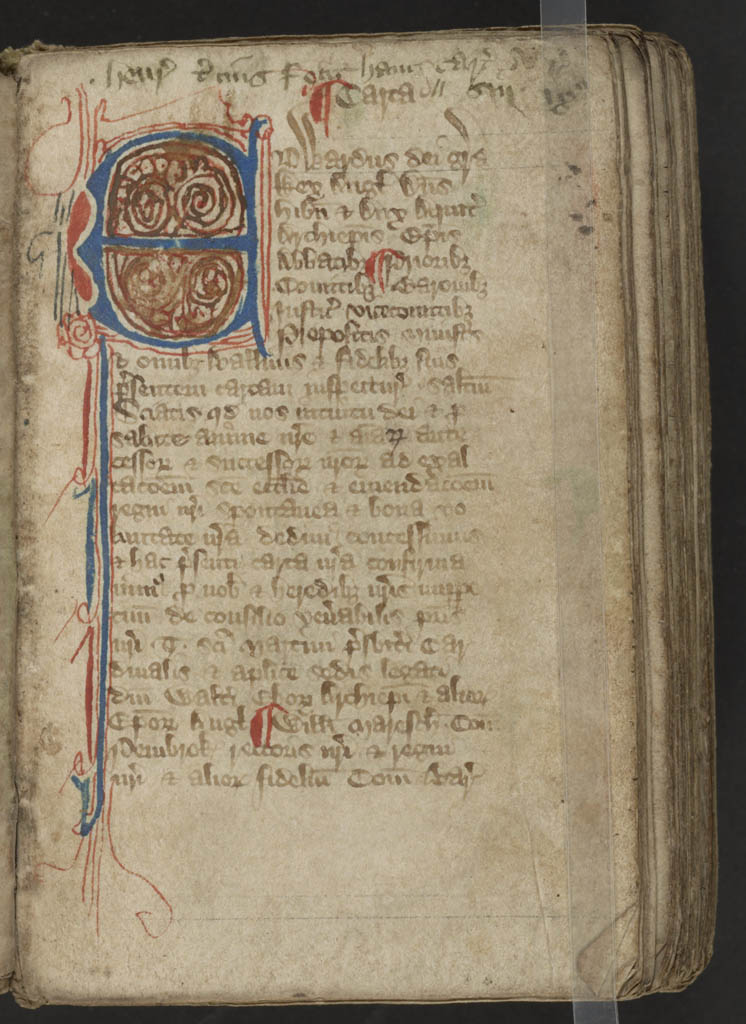 For Jacobs and his team, working on Magna Carta: Muse and Mentor presents unique logistical challenges in arranging for transport of such a valuable document and the special case in which it must be displayed.  After crossing the Atlantic and being displayed at two venues in Massachusetts, Magna Carta will arrive at the Library only a short time before the exhibition opens.  It then must be returned to the United Kingdom quickly to be displayed at the British Library.  Library of Congress Senior Registrar Tambra Johnson has spent many hours conferring with officials in Britain and Massachusetts, conservators, and fine art transportation companies.  She is also preparing an application for a federal indemnity to help cover cost of insuring the priceless document.

In January 2012, Shaffer left the Law Library to become Associate Librarian for Library Services at the Library of Congress, and David Mao was appointed twenty-third Law Librarian of Congress.  He took over the project and the Law Library. Under Mao’s leadership, Newlen and his colleagues focused on crafting an exhibit that would pay homage to a dynamic history of a precious document that resided at the Library during a key moment of modern history.  Working together, Nathan Dorn and Martha Hopkins began to visualize the narrative of the exhibition.  Their work and artistry can be summed up in the intellectual take-away of visitors after they depart the exhibit space with a story crafted from the materials at hand, which is what all great exhibitions do, regardless of subject matter.

While tracing the history of Magna Carta over eight centuries, the Library of Congress exhibition will shine a light on the historic events at Runnymede and trace the impact of its legacy on the U.S. legal system, American legal tradition, and foundations for the rule of law.

Tracing a Unique Tie to Lincoln Magna Carta.
During the 1939 ceremony marking the transfer from British Ambassador Philip Henry Kerr to the then-Librarian of Congress Archibald McLeish, Kerr had this to say about the document’s transfer to the Library:

It was, therefore, but natural that when the second great war of this century descended upon us this autumn the British Government should have hesitated to imperil so precious a possession by trusting it to the angry transit of the seas, back to its Cathedral shrine.  It therefore instructed me to inquire whether a home for it could be found in the Library of your National Congress for the duration of the war or till it was needed elsewhere.  To our great delight the Library has granted our request and his courtesy has found for Magna Carta this wonderful position, where it lies alongside its own descendants, the Declaration of Independence and the American Constitution, and where, like them, it will be guarded by day and by night. 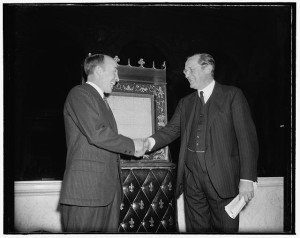 Law Librarian of Congress David Mao summed up the significance of the 2014 transfer loan: “We are honored to once again host this legal treasure, allowing a different generation of Americans to have a first-hand look at one of the most enduring vehicles of liberty.”

While tracing the history of Magna Carta over eight centuries, the Library of Congress exhibition will shine a light on the historic events at Runnymede and trace the impact of its legacy on the U.S. legal system, American legal tradition, and foundations for the rule of law.  Additionally, through this exhibition, the Library aims to broaden public understanding of Magna Carta’s influence on American political thought and the role of the legal system in relation to the U.S. constitutional form of government.

Magna Carta’s Return to Great Britain.
After its appearance at the Library of Congress, the Lincoln Cathedral Magna Carta will return to Great Britain to be placed briefly on display at the British Library, along with the other three surviving 1215 issues of the document.  Over three days the documents will be presented together for the first time, giving researchers and the public a rare chance to view the texts side-by-side. B 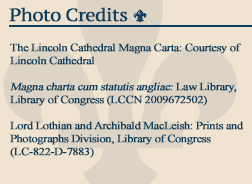