A Revolution In Realia 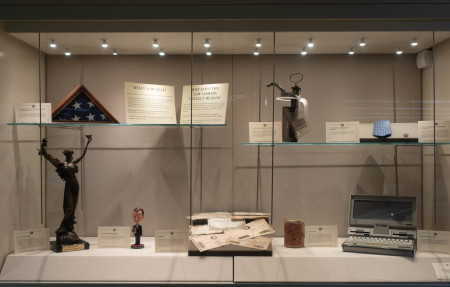 In addition to collecting “traditionally” in books, manuscripts, digital works, microform, and other media, the Law Library collects realia.  Its current exhibition, Realia in the Law Library, displays nine objects from its collection.

In the realm of library science, the term “realia” signifies all non-documentary, three-dimensional objects.  A piece of realia is a primary source, the “thing itself,” not documentation of the “thing.”  Realia are objects which provide direct evidence of past events.  As such, libraries with realia collections typically use the objects for teaching or display.  Frequently and logically, as in the case of the Law Library, the pieces of realia relate to institutional history, or to subjects or authors represented in the collection.  Unsought realia can slink into a collection with a gift of books.  Realia “non sequiturs,” being illogical in relation to the collection, would tend not to find a place there unless valuable, famous, or infamous.

In the realm of library science, the term “realia” signifies all non-documentary, three-dimensional objects.

Examples of realia include relics, artifacts, souvenirs, specimens, and other physical objects which do not fit into the standard documentary categories of books, sound recordings, administrative documents, or other records of the human experience. 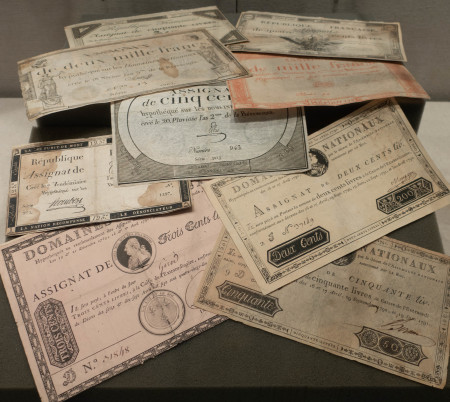 A selection of assignats from the French Collection, some with the likeness of Louis XVI featured prominently. Originally issued during the French Revolution as bonds, assignats functioned as currency until 1796, when they became virtually worthless.

“Realia” is the plural form of the Latin noun “realis.”  It has no corresponding singular form in English.  It accepts verbs in either their singular or plural form.

Why do libraries resist collecting realia? Mainly because they can be difficult to describe, handle, and house. Libraries traditionally nurse a prejudice against collecting non-book objects.  You can imagine why; how about cataloging taxidermy?  Or housing, maintaining, preserving, displaying, and assisting patrons with it?  Since libraries are created to buy, catalog, maintain, preserve, and assist patrons with books and their manuscript, digital, and microform counterparts, their librarians feel ill-equipped to welcome non-documentary objects into the library environment; they are alien intruders. That said, it is the rare library that owns no realia, regardless of its intent not to collect it.

Contemplating realia is a powerful complement to reading texts.

Today, libraries of all stripes are discovering the value of keeping realia in their collections.  Contemplating realia is a powerful complement to reading texts; physical objects offer a fresh and unexpected dimension to the historical narrative.  They bring to life aspects of an event, idea, or person with an immediacy that eludes written accounts. 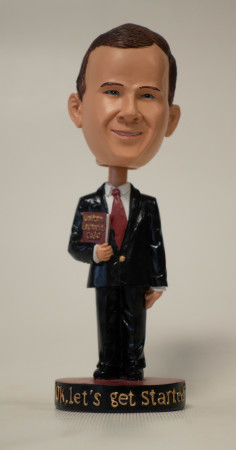 Realia collections tend toward diversity.  As proof, here is a list of the objects displayed in the Law Library’s current exhibition:

an assortment of assignats;

a brick “core” (construction detritus); and

The common thread?  Each piece relates to the history or culture of GW Law, or to an aspect of its Law Library collections, and as such, reveals a scrap or dollop of information that would not be found in documentary sources.

Please visit our Spring 2019 Exhibition Realia in the Law Library on the First Floor near Circulation.B